The National Mall in Washington DC is already packed ahead of the inauguration of US President-elect Joe Biden.

However, it is nearly 200,000 Stars and Stripes flags rather than people who are filling the grassy park near the US Capitol building ahead of the inauguration of Mr Biden and his Vice President-elect, Kamala Harris.

The Presidential Inauguration Committee announced the ‘Field of Flags’ installation is part of the “America United” theme that it has chosen for the inauguration.

Mr Biden and Ms Harris will be sworn into office tomorrow on the steps of the US Capitol. 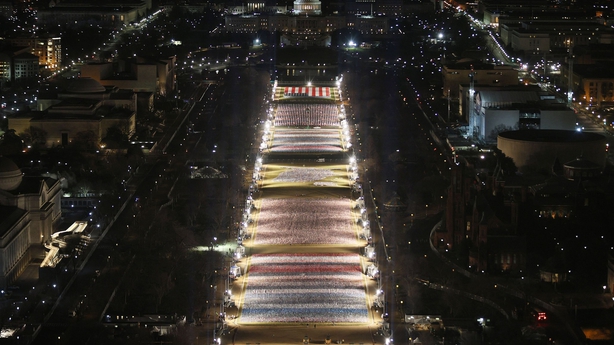 Attendance for the event was already limited, with festivities largely virtual due to the Covid-19 pandemic, heightened security was put in place after the storming of the Capitol on 6 January by supporters of outgoing President Donald Trump.

A presidential inauguration traditionally draws hundreds of thousands of visitors to Washington.

According to a press release the art installation includes flags from every US state and territory, as well as 56 pillars of light.

Pop stars Lady Gaga and Jennifer Lopez are scheduled to perform at the inauguration, which will see Mr Biden sworn in as the 46th US President, and Ms Harris as the first female Vice President.

A ‘Field of Flags’ has been set up on the National Mall to represent Americans who can’t attend the Joe Biden-Kamala Harris inauguration. According to a press release the art installation includes flags from every U.S. state and territory, as well as 56 pillars of light. pic.twitter.com/gSKrXt66p8