US Secretary of State Mike Pompeo has said that China is committing genocide against the mostly Muslim Uighur people, in a stinging statement on his last full day in office.

“I believe this genocide is ongoing, and that we are witnessing the systematic attempt to destroy Uighurs by the Chinese party-state,” Mr Pompeo said in a statement.

“We will not remain silent. If the Chinese Communist Party is allowed to commit genocide and crimes against humanity against its own people, imagine what it will be emboldened to do to the free world, in the not-so-distant future,” said Mr Pompeo, whose vociferous criticism of Beijing has been a hallmark of his tenure.

Mr Pompeo urged all international bodies including courts to take up cases against China’s treatment of the Uighurs and voiced confidence that the United States would keep raising pressure. 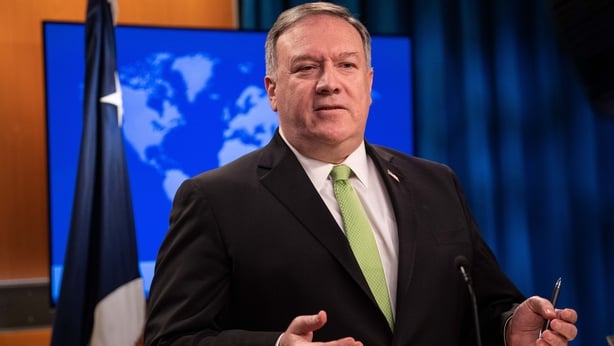 Rights groups believe that at least one million Uighurs and other mostly Muslim Turkic-speaking Muslims are incarcerated in camps in the western region of Xinjiang.

Witnesses and activists say that China is seeking to forcibly integrate the Uighurs into the majority Han culture by eradicating Islamic customs, including by forcing Muslims to eat pork and drink alcohol, forbidden by their faith.

China denies wrongdoing and contends that its camps are vocational training centres meant to reduce the allure of Islamic extremism in the wake of attacks.

Unlike many decisions by Mr Pompeo seen as boxing in President-elect Joe Biden, the genocide declaration could be welcomed by the new administration.

Mr Biden himself has called for a stronger focus on human rights, with his campaign describing the treatment of the Uighurs as genocide, meaning that his administration will now face less pressure for a formal declaration once in office.

Read more: Inside Xinjiang – China cracks down on Uighur population

China’s network of detention centres in the northwest Xinjiang region is much bigger than previously thought and has been expanded in recent years, according to research presented by an Australian think tank.

In September last year, the Australian Strategic Policy Institute said it had identified more than 380 “suspected detention facilities” in the region – where China is believed to have detained more than one million Uighurs and other mostly Muslim Turkic-speaking residents.

The number of facilities is around 40% greater than previous estimates, according to Australian researchers, and has been growing despite China’s claims that many Uighurs have been released.

Fourteen more facilities were under construction in 2020 and around 70 have had fencing or perimeter walls removed, indicating their use has changed or they have been closed.