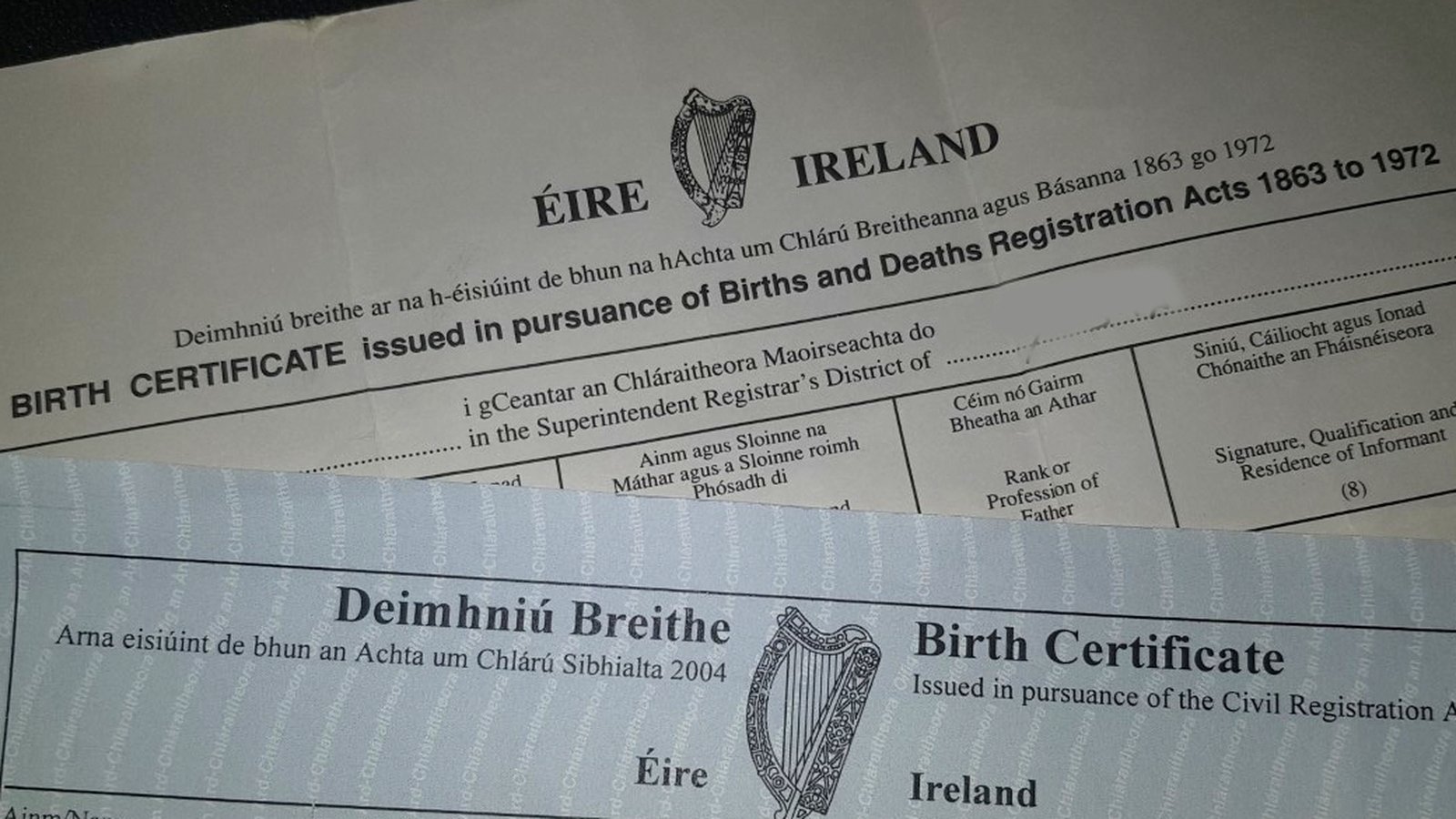 Attorney General Paul Gallagher has confirmed to Taoiseach Micheál Martin that no referendum will be required on the legal right to access birth certificates.

A bill will be published shortly on the information and tracing legislation with regard to survivors of mother-and-baby homes.

The right to a birth certificate and securing information about their origins is at the root of a campaign by those born in mother-and-baby homes.

The report by the Commission of Investigation into Mother and Baby Homes and certain related matters was published on Wednesday.

The right to a birth certificate was acknowledged by the commission who stated that this should be allowed.

Reflecting on a range of submissions and analysis in the report, its view is that adopted people have a right to their birth certs and associated information and this should only be denied in exceptional circumstances.

It believes medical information and adoption records compiled at the time of the adoption should also be available.

A six-month waiting period is recommended by the commission from when a request is made for this information to when it can be accessed.

It also suggests important legislation be provided for a support system as it anticipates there can be problems for people who find very important information in this manner.

The likelihood of a referendum being required to allow for the necessary legislation was also put forward in its recommendations.

Commission of Investigation on #motherandbabyhomes had suggested a referendum would be required. Lots of legal opinion this week to the contrary. Min for Children earlier this week said the approach would be based on GDPR in order to get past previous legal difficulties.

During the course of its investigation the Mother and Baby Homes Commission took evidence from people engaged in both sides of the argument.

On the one hand it noted how the main issue raised by lobby groups and individuals born in mother-and-baby homes was information and tracing.

It makes reference too to the UN Convention on the Rights of the Child which states the important principle that children are entitled to the information necessary to preserve their personal identity.

On the other hand, it reveals how social workers who had contact with birth mothers gave evidence to the commission about the ramifications of their privacy rights “being eroded” if birth information was revealed without their consent.

They told the commission that, when recent statistics gathered by them were analysed, it was noted that over 50% of birth mothers contacted as part of a search by an adoptive person did not wish to engage with their service.

Many of the women told them of their terror at the prospect of the proposed legislation on tracing being implemented.

They told the commission that this group of women were a very vulnerable cohort and that their views were not being heard.

The concerns of the social workers were also brought to the attention of the Commission by the Council of Irish Adoption Agencies who said they believed these women live in fear of being discovered and feeling their lives would be destroyed.

Despite these concerns, the report stresses that social workers who gave evidence were “wholeheartedly” in favour of the release of birth certificates and recommended that the onus should no longer be placed on the birth mother.

Instead they suggested that the birth mother should be informed once a request is made from the adopted child and while she may not have the right to prevent the information being released, she will be afforded the time to “manage her feelings and her life circumstances” along with support being given to her, such as counselling.

They suggested a 12-month consultation period as the appropriate amount of time prior to the birth certificate being released.

However, the commission in its assessment suggested 12 months was too long and six months would be more appropriate.

The commission goes on to recommend that if a mother, following support from social workers, still believes her privacy rights are being seriously eroded then the matter should be brought before the Circuit Court.

In Dec 2019 the Adoption Information and Tracing Bill was paused by the then Minister Katherine Zappone who said it was the Attorney General’s view that it is “constitutionally unacceptable to allow unrestricted access to birth information for adopted people”.