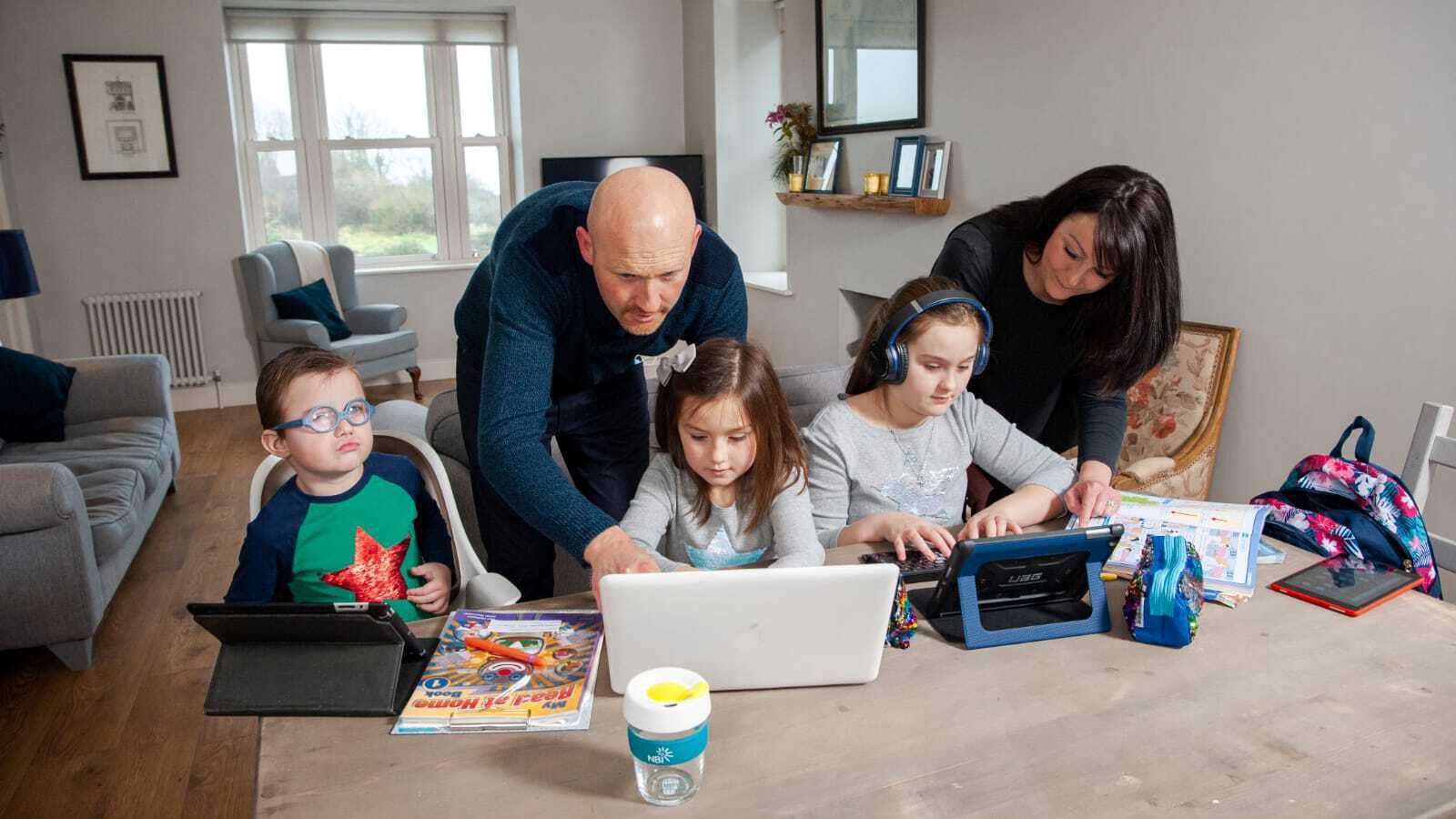 The company was awarded the contract and up to €2.7 billion in State investment to extend high-speed fibre broadband to over one million people in areas not covered by existing commercial operators.

The O’Connor family live in Shanbally in County Cork, half way between Carrigaline and Ringaskiddy.

Since they set up home there six years ago, their broadband through a copper wire cable only allowed download speeds of five megabits per second – not even enough for home schooling.

“We were relying on the old phone lines to our home. That gave us around five megabits per second, which is 10 years behind where we needed to be with current technology,” Brian O’Connor explains.

“It didn’t allow us to download videos: that could take up to an hour. For video calls it was very poor. It just wasn’t up to par.”

The new high-speed network has delivered download speeds of at least 500 megabits per second – 100 times faster that what they were used to.

Now Brian, his wife Lorna, and three children, Freya who’s 10, Elsa  who’s seven, and five year old Hugo can all be online at the same time, without compromising the quality of the service they are accessing.

Brian describes connection to the network as transformative: “It has future-proofed our family and our home.”

“It’s fibre-to-the-home,” says Brian, “so it’s not stopping at the pole – it’s coming all the way into the house. We are getting speeds of over 100 times faster than what we were getting.”

He added: “This new connection to high-speed fibre broadband under the National Broadband Plan is going to bring incredible benefits to our family. Our youngest son starts school next year and will need a reliable internet connection to convert his schoolwork to braille.

“I also work away from home frequently, so having the ability to speak and see each other remotely is going to mean the world to us, as well as helping us have more regular contact with other family members. These are things that many people in other areas might take for granted.”

National Broadband Ireland says subsequently other homes elsewhere in County Cork and also in County Cavan have been connected to the network, with connections in County Limerick and County Galway to be added in the coming weeks.

“We started with boots on the ground in January 2020,” David McCourt, Chairman of National Broadband Ireland said.

“Teams have scaled and mobilised to be in 26 counties across the country, working incredibly hard to roll out the National Broadband Network as quickly and effectively as possible, despite the extremely challenging environment caused by Covid-19.”

Mr McCourt said National Broadband Ireland teams nationwide have conducted over 158,000 surveys and 120,000 designs of individual premises as part of the first steps of the roll out.

“While working in accordance with the Government’s Covid-19 guidelines to keep our teams and the public safe, we are doing everything in our power to ensure we can connect premises as quickly as possible,” Mr McCourt said.

National Broadband Ireland has committed to connecting 1.1 million people in more than half a million homes to its network in the seven years it will take to build it.

Commenting on the first connections, Taoiseach Micheál Martin said: “The first rollout of the National Broadband Plan to these homes and businesses in Carrigaline is a significant milestone.

“Access to a new high-speed fibre network will be transformative for communities and businesses across Ireland, especially in light of the pandemic and an increasing reliance on remote working and learning.

Minister for the Environment, Climate and Communications, Eamon Ryan welcomed the news that the first homes and businesses are benefitting from minimum speeds of 500 megabits per second.

Residents and businesses will be able to place orders with a number of retail service providers who will offer services over the network.

As a wholesale provider, National Broadband Ireland will make its new fibre-to-the-home network available to all retail service providers operating where high-speed fibre broadband is currently not available.

Some 33 retail service providers have already signed up to sell services on the National Broadband Ireland network, and 17 are certified as ready to start providing connections to the first premises once they become available and customer orders are made.