On the cusp of becoming president, Joe Biden pressed today for unity, while President Donald Trump remained secluded in the White House at the centre of Washington DC, a city inundated with troops and security barriers.

Mr Biden marked the US public holiday of Martin Luther King with a trip from his home in Delaware to pack food bags for charity in Philadelphia – a gesture symbolising his call for Americans to come together after four divisive years.

“Service is a fitting way to start to heal, unite, and rebuild this country we love,” the 78-year-old Democrat said in a video marking the occasion.

But Mr Biden’s fervent appeals for optimism and healing – which are also set to dominate his inauguration ceremony at noon on Wednesday – are running up against the hard reality of multiple crises.

Covid-19 is out of control across the US, vaccine distribution is stumbling, and economic recovery remains in the balance.

And after Mr Trump refused for more than two months to accept the results of November’s presidential election, the country is seething with division and anger.

When Mr Biden takes the oath of office at noon on Wednesday, he will face a city under the protection of more than 20,000 National Guard soldiers.

Checkpoints and large zones closed to ordinary citizens mean there will be only a smattering of guests. 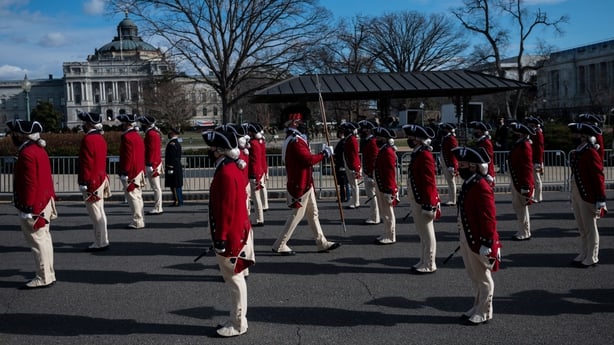 Similar lockdowns have been imposed at state capitol buildings around the country where local authorities fear provocations from right-wing groups ahead of the inauguration.

A brief security scare today near Congress sparked an evacuation of the site where the president-elect will take the oath.

A practice session for the ceremony included members of the US military marching iin a dress rehearsal including the Old Guard Fife and Drum Corps.

In a culturally significant mark, the legendary country singer Garth Brooks said that he was joining the musical line up at Joe Biden’s ceremony, stressing this was “not a political statement, this is a statement of unity.”

Mr Trump, who has still not congratulated Joe Biden or invited him for the traditional tea visit in the Oval Office, has been largely out of the public eye since his supporters rampaged through Congress on 6 January, triggering his historic second impeachment a week later.

His final Gallup poll as president today showed him exiting with 34% approval, his record low. His overall average of 41% since taking office is also the lowest for any presidency’s approval rating since Gallup began measuring in 1938.

According to US media, one of Trump’s final actions could be announced tomorrow at the latest: scores of pardons for convicted criminals.

Speculation is mounting over whether the outgoing president will take the unprecedented and legally murky step of issuing himself and his children, who work as campaign and White House advisors, preemptive pardons.

Read more:
5 ways in which this inauguration will be different

According to CNN and other outlets, Donald Trump has a list of about 100 people to whom he will grant clemency.

Controversial possible pardons that have been the subject of speculation for months would include the likes of Edward Snowden, Julian Assange and Mr Trump’s influential advisor Stephen Bannon.

Mr Trump, the first president to lose re-election since George HW Bush was replaced by Bill Clinton, is skipping Joe Biden’s inauguration – the first ex-president to snub his successor in a century and a half.

On Wednesday, he’ll travel to his Mar-a-Lago golf club residence in Florida, departing the White House early in order to benefit from full presidential travel privileges up to the last minute.

Marine One will take him from the White House to Joint Base Andrews to catch Air Force One – the presidential plane that will no longer be his to use from noon.

Joe Biden has promised quick action to address the coronavirus pandemic and boost the ailing US economyonce he takes office on Wednesday, but his goal of uniting the divided country could be undermined by the Senate impeachment trial of Donald Trump.

The lower House of Representatives impeached the president on a charge of inciting insurrection after he encouraged the protest that led to the violent storming of the US Capitol.

The US president’s first impeachment trial, in January 2020 over his efforts to pressure Ukraine to help him discredit Joe Biden, lasted 21 days.

A trial of similar length now would crimp Mr Biden’s ambitious plans for his first 100 days, but he has expressed confidence, based on his 36 years in the Senate, that the chamber can do two things at once.