Eleanor Burnhill looks at the background of the new President Joe Biden and how he might use today’s scaled back inauguration to re-connect with some traditions from the past.

Considering he will be sworn into office at the US Capitol, where extraordinary scenes played out during the storming of the building on 6 January last, this was never going to be an easy transition to power for new US President Joe Biden.

Central Washington is an armed fortress, fenced off with razor wire and surrounded by 25,000 National Guard troops, already providing a stark contrast to previous inaugurations when the United States capital erupted in days of celebration.

But in many ways, veteran Joe Biden, who also served as Vice-President to Barack Obama, will be hoping that this inauguration will herald a reconnection with traditions and the past.

The Democratic 46th president, a devout Catholic who is proud of his links to Ireland, has invited top Republican and Democratic congressional leaders to a bipartisan prayer session at church service this morning at St Matthew’s Cathedral, which is behind the sealed-off barriers surrounding the centre of government in Washington DC.

Two weeks after an unprecedented violent assault on the US Capitol by supporters of outgoing President Donald Trump, Joe Biden is set to make national unity a key plank of his political platform.

“America united” is the theme of the inauguration and represents the new president’s stated wish to heal a divided country.

House Speaker Nancy Pelosi and Senator Chuck Schumer, the leading Democrats in Congress, have also been invited along with House Minority Leader Kevin McCarthy, according to a source close to Biden.

His immediate family will also be in attendance where they will hear music from one of Ireland’s top violinists Patricia Treacy. She will perform on a 315-year-old Stradivarius violin, loaned to her from Joe Bein & Co in Chicago, and estimated to be worth $4m (€3.3m).

Her main piece is believed to be The Proclamation composed by Patrick Cassidy. She previously performed it at the Garden of Remembrance in Dublin, during the 1916 Centenary Commemorations as Irish President Michael D Higgins laid a wreath to honour those who died.

In a clear break with inaugural traditions, the outgoing US President Donald Trump will not be in attendance but his deputy Vice-President Mike Pence is expected to be there.

After the swearing-in ceremony as the new commander in chief, Joe Biden will partake in the Pass In Review ceremony, which will see him inspecting troops on the east front of the Capitol buildings.

Both Joe Biden and Vice President Kamala Harris, with their spouses, will then receive a military escort to the White House.

After the inauguration itself, new President Joe Biden is expected to join Barack Obama, George W Bush and Bill Clinton at Arlington National Cemetery where they will lay a wreath in a sombre ceremony at the Tomb of the Unknown Solider.

Oldest president ever in White House

At 78-years-old, Joe Biden is set to make history by becoming America’s oldest ever president today and it took him several attempts to get to the White House.

Born Joseph Robinette Biden Junior on 20 November 1942, he was raised in the Rust Belt town of Scranton, Pennsylvania in an Irish-Catholic family.

His father was a car salesman and when the city went through tough times in the 1950s, he lost his job, and the family moved to neighbouring Delaware when Joe Biden was 10 years old.

“My dad always said: ‘Champ, when you get knocked down, you get back up,” Biden said of his father and this tenacity has certainly lasted throughout his political career.

He studied at the University of Delaware and Syracuse University law school, and he has often expressed his pride in his working-class roots and the fact that he did not attend an elite Ivy League college.

In the first presidential TV debate, Biden sought to clearly differentiate himself from Donald Trump, who he accused of paying little income tax despite his billionaire businessman status.

The former vice president said: “It’s a little bit like how this guy and his friends look down on so many people… They look down their nose on people like Irish Catholics, like me, who grow up in Scranton.”

Vowing to work to defeat racism in America as president, Biden said that under the Trump presidency, America in the last four years has become “weaker, sicker, poorer, more divided and more violent”.

A coronavirus pandemic that shows little sign of abating will be top of his policy agenda in the White House along with the economy and racial justice.

Joe Biden was just 29 when he entered national politics with a surprise US Senate win in Delaware in 1972.

But just a month later, after his 30th birthday, tragedy struck as his wife Neilia and their one-year-old daughter Naomi were killed in a car crash as they went Christmas shopping.

Biden’s two sons, Beau and Hunter, were severely injured in the same collision. He was sworn into the Senate beside their hospital beds.

Later, as they recovered, he frequently travelled back from Washington DC on the train so he could spend time with them, following the loss of their mother.

He has credited his second wife Dr Jill Biden as a powerful support in his personal life, saying she had acted as a mother to the two boys. “She put us back together,” he said.

In 2015, Beau Biden died from cancer at the age of 46. This tragic loss prevented Joe Biden from launching a presidential bid in 2016.

Both father and son were very close and in January this year, Biden revealed Beau had an undeniable influence on his campaign this time around. “Every morning I get up… and I think to myself, ‘Is he proud of me?'”

Almost every Sunday, Biden goes to pray at St Joseph on the Brandywine, a Catholic church in his hometown of Wilmington, Delaware.

He was there with his family on election day before reportedly walking across the street to the cemetery where his son Beau, his first wife, and his daughter are buried.

His other children, Hunter and Ashley Biden, campaigned for their father during his latest presidential run, and introduced him as the presidential nominee during the 2020 Democratic National Convention.

Despite being a favourite of the Democratic establishment, Joe Biden struggled to secure his place as a presidential contender in this election, with many in the party worried he was too old or too centrist.

His campaign appeared to be heading for disaster, following primary losses to the fiery Bernie Sanders.

However, the overwhelming support of African-American voters gave him the edge in South Carolina’s primary, clinching him the nomination in February.

He then surged to victory in at least eight of the 14 states where Democrats held primaries on ‘Super Tuesday’ in March, outperforming expectations.

Biden was successful on his third run for president.

He quit in disgrace in 1988 after part of his speech was found to be plagiarised from British politician Neil Kinnock.

In 2008, he dropped out after getting less than 1% of the vote in Iowa’s caucuses before he was ultimately picked to be Barack Obama’s vice-presidential running mate. 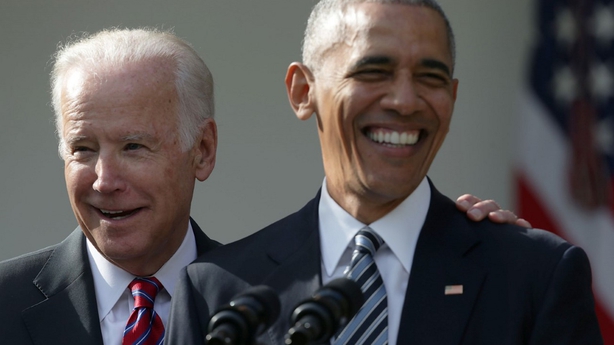 Biden’s 36-year-career in the US Senate and his vast foreign policy experience meant he was a valuable support to the younger president, who joked about their close relationship as a “bromance”.

In January 2017, President Obama bestowed the US nation’s highest civilian honour on a clearly emotional Biden.

During the campaign to become president, Joe Biden was often forced to defend his son Hunter, a lawyer and lobbyist who received a lucrative salary on the board of a Ukrainian gas company, whilst his father was vice president.

Donald Trump had accused Hunter of being involved in corrupt business deals with China, Ukraine and Russia, but it is as yet unclear whether these controversies will follow Biden into the White House. He has said there is no evidence to support these allegations, which he has called false and discredited.

Joe Biden has also been accused by multiple women in the past of having a “touchy feely” hands-on style, which led him to release a video on his Twitter account in April 2019, in which he promised to be more respectful of people’s personal space.

“I’ll always believe, governing quite frankly, life for that matter, is about connecting, about connecting with people, that won’t change. But I will be more mindful about respecting personal space,” he said.

Diplomats here believe a Biden presidency will herald a change in US policy towards Ireland, in the form of a move away from President Trump’s mantra to always put ‘America First’.

Anne Anderson, the first female Irish Ambassador to the United States, has described Joe Biden as a proud Irish American. “His identity as an Irish American is at the core of who the man is. He knows Ireland, he loves Ireland.”

His campaign manager has also said that Biden’s roots and his faith form part of how he will govern.

Jen O’Malley Dillon who will become his deputy chief of staff when he takes office said last month:

“Obviously the president-elect is a proud Irish-American and so much of the leader he is, is part of the story of his life of resilience, where he comes from and his roots.”

“He’s a man of strong faith and has strong values that are steeped in his life growing up in Scranton,” she added.

When it comes to the issue of Brexit, Biden’s sympathies are expected to instinctively lie with the European Union.

This was borne out by a tweet the Democrat leader posted in mid-September last year when he warned the UK: “We can’t allow the Good Friday Agreement that brought peace to Northern Ireland to become a casualty of Brexit.”

Casting doubt on any post-Brexit trade deal that the UK might hope to cement with the US after this election, Biden added: “Any trade deal between the US and UK must be contingent upon respect for the agreement and preventing the return of a hard border. Period.”

We can’t allow the Good Friday Agreement that brought peace to Northern Ireland to become a casualty of Brexit.

Any trade deal between the U.S. and U.K. must be contingent upon respect for the Agreement and preventing the return of a hard border. Period. https://t.co/Ecu9jPrcHL

Joe Biden has in the past been a frequent visitor to Ireland as a senator and made a six-day visit here as vice president under Barack Obama in 2016.

He came at the invitation of then taoiseach Enda Kenny and travelled with his brother and sister, his daughter Ashley and five grandchildren.

He said he had promised his late son Beau a family trip to Ireland, but said: “Unfortunately Beau didn’t make it, but we decided that we would bring the whole family.”

Biden said his great-grandfather Patrick had emigrated from Ireland and Biden has links to both the Blewitts of Ballina in Co Mayo and the Finnegans of Co Louth on the Cooley Peninsula.

Biden has often quoted the poet Seamus Heaney is his campaign speeches and may do so again during today’s inauguration ceremony.

St Patrick’s Day will fall within his first 100 days in office, although it is as yet unclear whether the handing over of the traditional bowl of shamrock at the White House will be impacted by the ongoing Covid-19 pandemic.

The US administration has already announced an ambitious plan to tackle the economic fall-out from Covid-19 and to carry out 100 million coronavirus vaccinations in his first 100 days in power.

Dr Anthony Fauci, director of the National Institute of Allergy and Infectious Diseases, has described this as an “absolutely a doable thing”.

There will be special coverage of the US Presidential Inauguration on RTÉ One at 3.30pm today