As officials warn we are at the most challenging point in the pandemic to date, case numbers are climbing in some age groups despite some positive indications that things may be stabilising.

Here are seven things we learned from today’s Department of Health briefing.

Almost half of all cases reported recently

With case numbers soaring, the past fortnight has seen Ireland break its own grim records on daily reported Covid-19 cases.

Professor Philip Nolan, Chair of the Irish Epidemiological Modelling Advisory Group, bore the stark news this evening that almost half of Ireland’s cases since the beginning of the pandemic have been reported in the last two weeks. That puts the 14 days of 2021 so far almost even with the total case numbers of 2020.

Specifically, 44% of all cases were reported in the last fortnight, with one in every 67 people being told they are positive for Covid-19 in that period.

Speaking at the NPHET briefing Professor Philip Nolan says almost half of all Covid-19 cases ever reported in Ireland have been reported in the last 14 days. pic.twitter.com/J3ULzDzm2X

Deaths in 2021 across most age groups

More information about the people who have died with Covid-19 so far this month has been released.

Of the 208 reported deaths, 23 were linked to hospital outbreaks and 38 to nursing home outbreaks.

The Department of Health confirmed that the youngest person to die this month was 25 years old. The ages range from 25 to 98 years.

“Every death associated with Covid-19 is a tragedy,” Dr Tony Holohan said in a statement.

“We must cut our social contacts in order to break the chains of transmission and protect those who are most vulnerable to this disease. Stay at home and save lives.”

There has been a significant rise in outbreaks in long-term residential settings, including nursing homes.

This is a cause for concern, said Prof Nolan at the Department of Health briefing.

There are more cases linked to long-term residential settings in the last two weeks than there were at any point during the weeks of the October/November surge.

They expect to see more cases linked to these settings in the coming weeks.

Prof Philip Nolan said the incidence is “far too high” across all age groups. 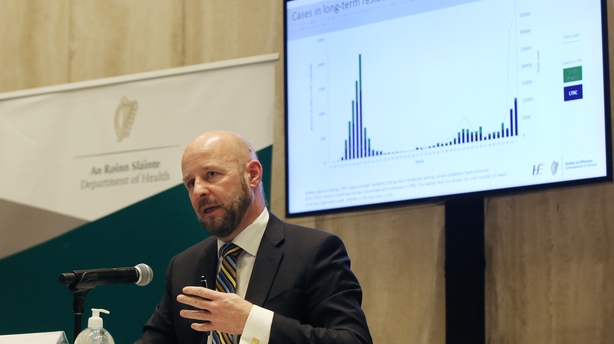 Prof Nolan said the number of people in hospital now exceeds twice what it was during the first wave in April last year.

He said we have a “long road” ahead of us before Covid-19 is brought under control, but we are beginning to see an improvement and some stabilisation.

He said the average number of contacts is closer to 1 when you take out household contacts.

While we are seeing some positive impact, hospitals will remain challenged in the coming weeks, he said.

Variant accounts for almost half of all cases

Prof Nolan said the new variant first identified in the UK was almost undetectable until the second week in December.

But the incidence of it has risen very sharply since then. It accounted for less than 10% of all cases in the middle of December, but this week, it accounts for 46% of all cases.

Dr Cillian De Gascun, Medical Virologist and Director of the National Virus Reference Laboratory, said it is “not unusual” for viruses to mutate over time.

“We have identified multiple different SARS-CoV-2 lineages in Ireland since the start of the pandemic, and two of the three recently emerged variants of concern from the UK and South Africa. We also expect that more variants will emerge across the world in the coming months.

“While some of the new variants will increase the risk of becoming infected because they have increased transmissibility – they can stick longer and better to surfaces – this does not mean that our continued adherence to the public health advice is in anyway less effective.”

Prof Nolan said the R-number over the past week is estimated to be between 1 and 1.3.

He said he expects to see hospital numbers peaking at between 2,000 and 2,400, adding that officials expect to see high numbers in hospitals until the end of January.