Donald Trump has left the White House for the last time as US president.

Mr Trump and his wife, Melania, departed on Marine One a short time ago and headed for Andrews Air Force base where he will board Air Force One and fly to Florida.

A small crowd waved goodbye as Mr Trump, 74, and the First Lady walked a short red carpet and boarded the helicopter shortly after 8.15am (1.15pm Irish time). 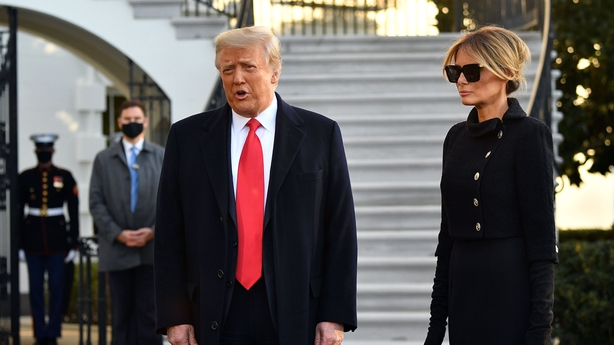 “I just want to say goodbye,” Mr Trump told the gathering, calling his time in office “the honor of a lifetime.”

He is not attending the inauguration of Joe Biden as the 46th US President this afternoon.

Donald Trump has left the White House for the last time as US president.
He departed on Marine One a short time ago and is heading for Andrews Air Force base where he will board Air Force One and fly to Florida. | Read more: https://t.co/WEjPtbFvDD pic.twitter.com/UAj7aIxsey

Speaking to a crowd at Andrews Air Force base, Mr Trump said it’s been “an incredible four years”.

Mr Trump said he will “be back in some form”.

His arrival at his Mar-a-Lago club in Palm Beach is being timed to get him behind the wall of the resort before his term as president expires.

Watch: Donald Trump gives speech to his supporters as he departs the White House for the last time https://t.co/NkMoctQw8S

Mr Trump broke days of silence yesterday with a pre-recorded farewell video address in which – for the first time – he asked Americans to “pray” for the success of the incoming administration.

But Mr Trump has yet to personally congratulate Mr Biden, who first ran for president in 1987, on his win, and the 11th-hour message followed months spent persuading his Republican followers that Democrat cheated his way to election victory.