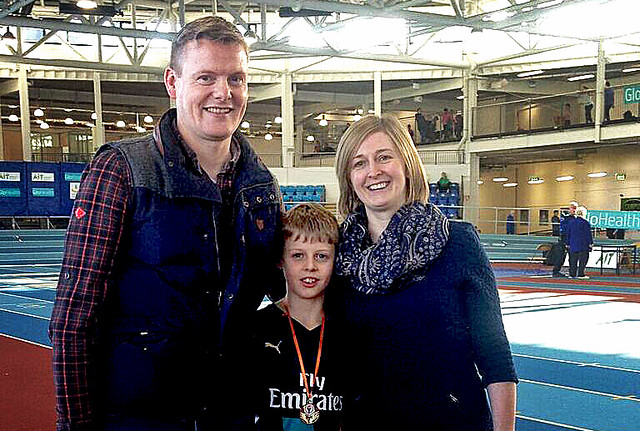 Mairead Supple wrote: Darragh Fahy, son of Sharon Supple and grandchild of Teresa and Bernie Supple, Garrow, Boyle, was crowned recent winner of Ireland’s Fastest Feet competition in Athlone on Saturday January 30th. Darragh’s journey began in Dublin, one of four qualifying locations across Ireland, where thousands of children aged 7 and 8 were tested on their maximum speed over 20 metres. Darragh qualified from the Dublin trials in a time of 2.86 seconds. The fastest eight kids from the four locations (Sligo, Belfast, Dublin and Cork) were brought to the state-of-the-art AIT Arena in Athlone, to race-off over 55 meters in front of a packed crowd. Having won in Athlone in a 55 metre straight sprint, Darragh is now Ireland’s fastest 8 year old boy and will now go on to represent Ireland in New York at the prestigious Millrose Games in the Fastest Kid on the Block Competition on February 20th, where he will compete with kids from all over New York.’