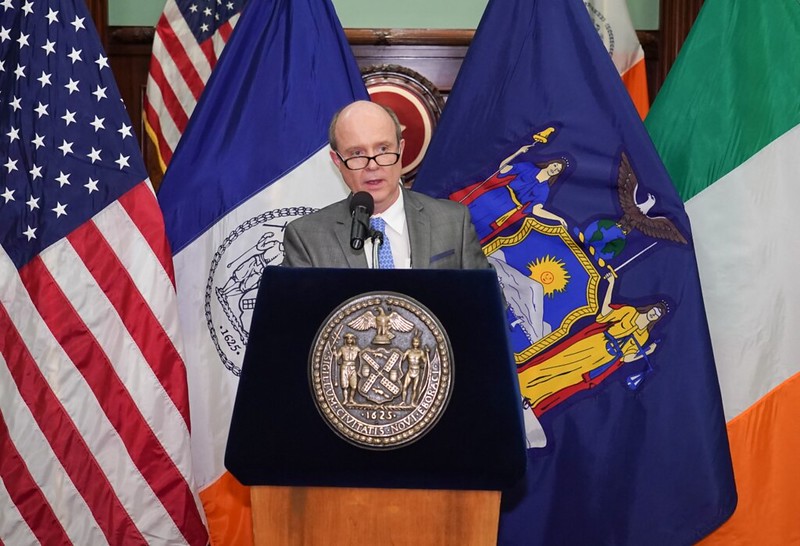 New York, NY April 23, 2021. Boyle, Co. Roscommon native, Hilary Beirne, recently became the newest member of the Irish Ad Hoc Committee to Protect the Good Friday Agreement (GFA), in Washington D.C. He was selected to join the bipartisan committee, which is dedicated to protecting the Good Friday Agreement and maintain an open border on the island of Ireland, based on his recognized leadership among the Irish diaspora in the United States.
Mr. Beirne is one of only two Irish-born U.S. Citizens to joins the distinguished group, which includes former members of the Clinton administration, two former U.S. Congressmen, five former U.S. Ambassadors, several prominent academics and leaders of influential Irish American organizations.
“I remember hearing of the Irish Ad Hoc committee as a child in Ireland; they were then and are now, well-respected in both U.S. and Irish political circles, so when I was invited to join, I accepted without hesitation,” said Beirne. “I remember in the 1970’s watching RTÉ news, when Tip O’Neill, then Speaker of the House and Chairman of the Committee, spoke of the “troubles” in Northern Ireland and U.S. support for Ireland.” said Beirne. He went on to say, “I look forward to serving in some small way Ireland – the land of my birth – and the United States.
The Ad Hoc Committee was formed by leading Irish American political leaders and diplomats who have a long-established history of supporting the peace process in Northern Ireland. The Committee’s brief deals with U.S. – European policy, particularly concerning Britain, Ireland, and Northern Ireland. The Committee’s current focus is protecting the gains of the Good Friday Agreement, post Brexit. The group hosts weekly meetings with political leaders from Northern Ireland, the United Kingdom, and the United States to discuss issues concerning economic and political stability in Ireland and Europe.
Mr. Hilary T. Beirne was educated in St Mary’s College, Boyle, Co. Roscommon. He holds a Bachelor of Science in Agriculture from University College Dublin & Galway, and Master’s degree in Environmental & Occupational Health Sciences from City University of New York, Hunter College. He is the Founding Chairman of the New York City’s St Patrick’s Day Foundation, Chief Administrative Officer of the NYC St Patrick’s Day Parade, and an Honorary Member of the famed “Fighting 69th” Regiment. He has received multiple awards / honors for his involvement with the Irish community in the United States. In March 2021, he was honoured by the Board of Legislators of Westchester County, New York, at their Irish History and Heritage Celebration; in April, he was honoured by the Irish Echo Newspaper (America’s Oldest Irish Newspaper – est. 1925) with a 2021 Arts and Culture Award.