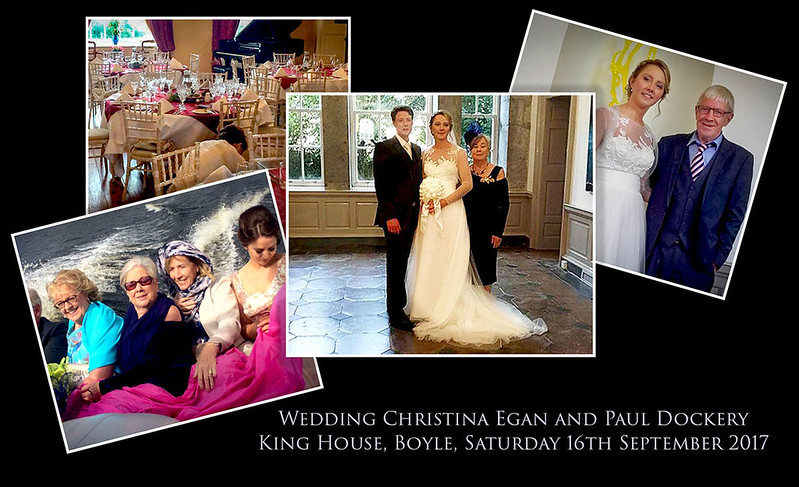 Christina Egan daughter of Maire Egan Paul, Boyle and Paul Dockery son of Ann and Mattie Dockery Creeve, Elphin came home from Wellington, New Zealand to be married in the beautiful surroundings of Lough Key with a champagne and tea reception hosted by Aideen and Michael of The Bazaar in the ubiquitous setting of King House in the Long Gallery (and who had previously organised an evening hen tea party in their Bridge St premises for Christina and her bridesmaids sister Davinia pals Sinead Rush and Amy Barry from Clare). Followed by a sit down reception for the bride and groom’s immediate family in Boyle’s own very regal King House Salon under the benevolent patronage of the bride’s uncle Tommy Egan manager and staff.
• Accomplished pianist Mary Duignan from Carrick on Shannon provided lilting Irish and international airs on the wonderful grand piano in the majestic chamber. Guests travelled from New Zealand, Australia, Kilkenny, Clare, Dublin and were all enraptured and captivated by the unique and historic setting of the former Dockery Barracks now attracting weddings and family events on an ever increasing basis. Christina and Paul continued their epic wedding plans with a visit to the Ploughing championships and her father’s home town of Kilkenny and with Ryanair’s permission onward to Corfu to attend another wedding followed by a stopover in Singapore for a couple of days to complete the diaspora nuptials.
• Maire says we constantly bemoan the lack of a hotel facility but we overlook the incredible and one off local facilities we do have.