Two former journalists, John Waters and Gemma O’Doherty, have begun their appeal against the High Court’s dismissal of their legal challenge against laws introduced by the State due to the Covid-19 pandemic.

They claim Covid-19 is a “common cold” and described it as an “alleged virus” and an “alleged pandemic”.

Measures taken by the State to deal with it were not based on science but on conjecture they allege.

Ms O’Doherty said most people did not know anyone who had Covid-19 or who had died from it.

Mr Waters and Ms O’Doherty claim the public health laws brought in by the State were unconstitutional and flawed.

But their case was dismissed by the High Court earlier this year, which found they had not put forward facts or expert opinion to support their case.

This morning Ms O’Doherty said she hoped the Court of Appeal would respect the science in relation to an “alleged pandemic” and an “alleged virus”.

She said the State parties had decided to embark on a completely new path never tested before in medical and scientific history by locking down the 99% of the population who are healthy to deal with the “common cold” which she said is what Covid-19 is.

Ms O’Doherty said they had asked the State for evidence that lockdowns, masks, social distancing, contact tracing or PCR testing were based on science but they had not produced one peer reviewed scientific study.

She said these measures were based on nothing more than conjecture.

Ms O’Doherty said the respondents were experimenting on Irish people with vaccines that had not passed normal safety trials.

She said the lockdown was barbaric and having a “grotesque impact on the health of Irish people”. 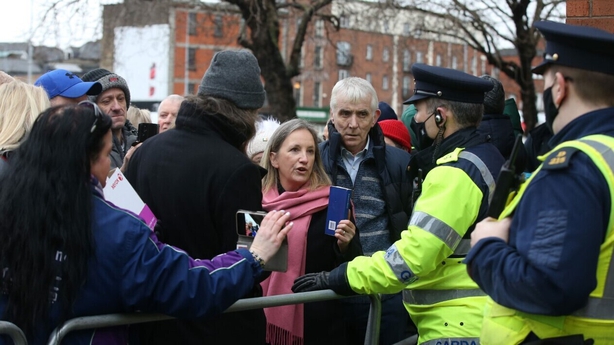 The average age of death from coronavirus was 83, which she said, was the age of life expectancy and the vast majority of Irish people would not be affected by the coronavirus.

Most people who died had “underlying conditions” and “their time was up anyway”.

Ms O’Doherty accused the State of manipulating and massaging the figures in relation to death and said it was the “greatest scam ever perpetuated on the Irish people.”

She said the damage from the lockdowns would be felt for generations to come.

There was a cure for the virus, she claimed, from hydroxychloroquine, vitamin C and Zinc but hospitals were putting people into intensive care and “bringing about their deaths”.

She said she had gone into hospitals “as an investigative journalist”  to see with her own eyes where the pandemic was.

They had been empty since last March she claimed.

The hearing is expected to last for the day.