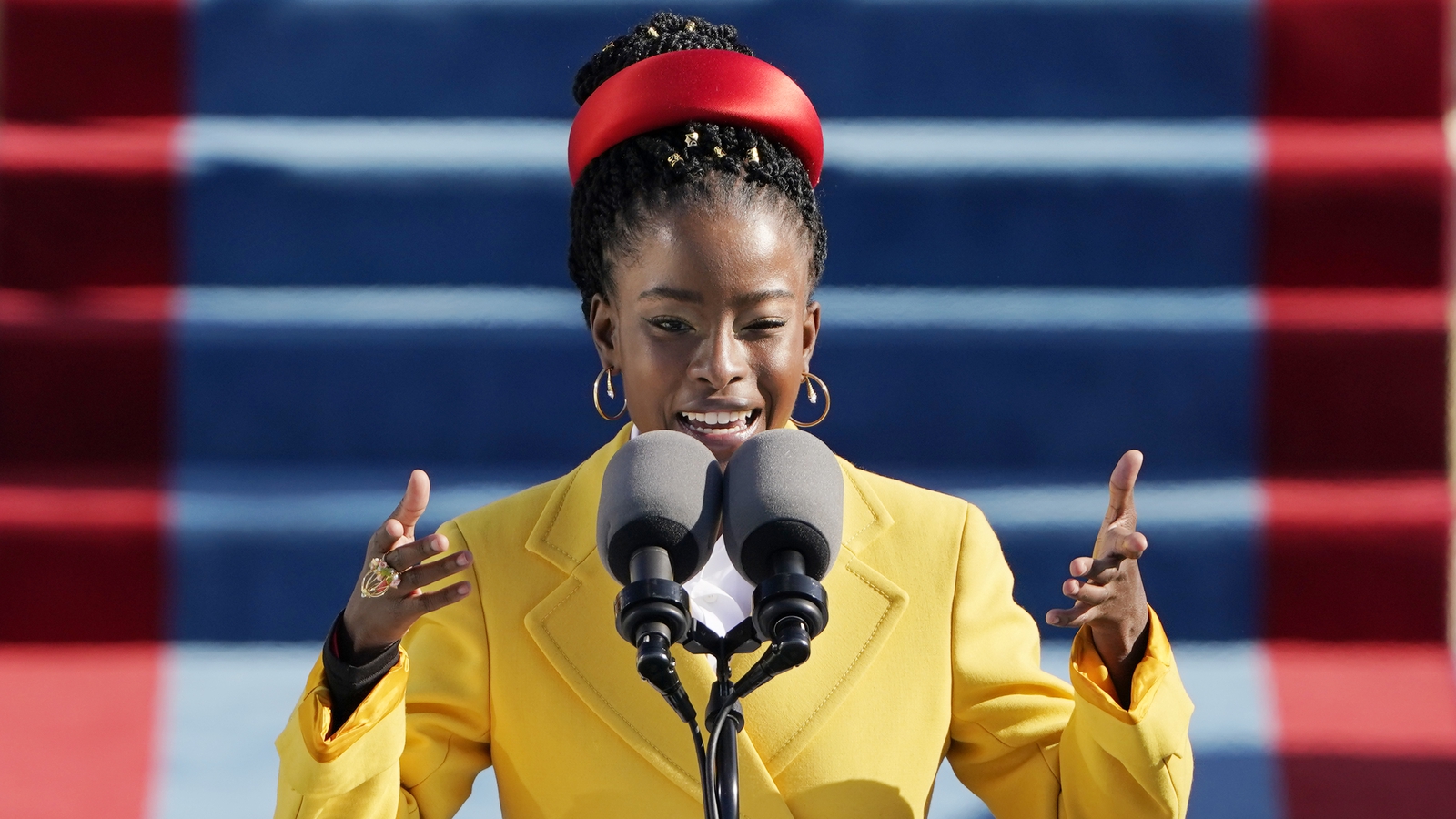 Poet Amanda Gorman became a sudden star at age 22 at President Joe Biden’s inauguration as she recited verse inspired by the Capitol attack, touching on how democracy “can never be permanently defeated.”

Ms Gorman was the youngest poet to recite at an inauguration, a role first given to Robert Frost by John F. Kennedy in 1961, after First Lady Jill Biden saw one of Ms Gorman’s readings and invited her to participate at the Capitol steps yesterday.

Amanda Gorman, the first national youth poet laureate in the United States, recites her poem “The Hill We Climb” at the #inauguration of President Joe Biden and Vice President Kamala Harris pic.twitter.com/8jVbMQDpg5

Ms Gorman said that she had been writing a few lines a day but stayed awake at night out of a compulsion to complete her inauguration poem, ‘The Hill We Climb,’ following the 6 January ransacking of the Capitol by supporters of then president Donald Trump who hoped to undo Mr Biden’s victory.

“We’ve seen a force that would shatter our nation rather than share it / Would destroy our country if it meant delaying democracy,” she recited.

“And this effort very nearly succeeded / But while democracy can be periodically delayed, / It can never be permanently defeated.”

Amanda Gorman, who graduated from Harvard University last year, was the first to hold the role of National Youth Poet Laureate by the Library of Congress and earlier held a similar honour in Los Angeles, where she has started a non-profit group to promote literacy.

She has previously written about the struggle for racial equality and the #MeToo movement against sexual assault.

Showing both composure and joy as she took the podium moments after Mr Biden, Ms Gorman opened her reading by speaking of how “We the successors of a country and a time where a skinny black girl descended from slaves and raised by a single mother can dream of becoming president – only to find herself reciting for one.”

Among her previous works, Amanda Gorman wrote ‘Tyrants Fear the Poet’ to address the 2017 white supremacist march in Charlottesville, Virginia – an episode that Mr Biden said motivated him to challenge Mr Trump, who had said the crowd included “very fine people on both sides”.

In a tweet following the inauguration yesterday, Ms Gorman thanked everyone for their support, quoting Irish poet W. B Yeats.

I AM ON THE FLOOR MY BOOKS ARE #1 & #2 ON AMAZON AFTER 1 DAY! Thank you so much to everyone for supporting me and my words. As Yeats put it: “For words alone are certain good: Sing, then”

In an interview with National Public Radio, Ms Gorman said that she grew up with a speech impediment in which she could not pronounce certain letters – a trait she shares with Mr Biden, who has been open about his struggles with stuttering.

Her reading triggered loud applause at the inauguration and an avalanche of praise on social media.

“I have never been prouder to see another young woman rise!” tweeted daytime television queen Oprah Winfrey, drawing a parallel to another celebrated writer, the late Maya Angelou, who read at Bill Clinton’s first inauguration.

I have never been prouder to see another young woman rise! Brava Brava, @TheAmandaGorman! Maya Angelou is cheering—and so am I. pic.twitter.com/I5HLE0qbPs

Joanne Liu, the former president of Doctors Without Borders, called Ms Gorman’s recitation “the most inspiring 5:43 minutes for the longest time.”

In fact-the most inspiring 5:43 minutes for the longest time https://t.co/Byl8M08gUe