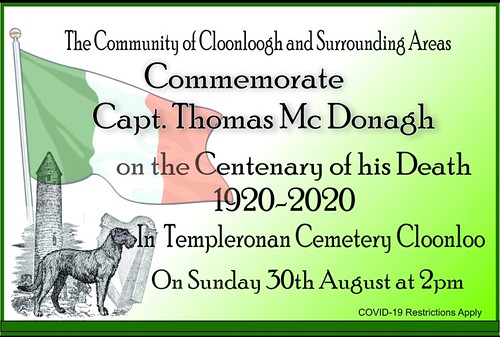 Thomas McDonagh of Cloonloo was born in America in 1900 and came to Ireland in 1904 to live with his Grandmother, aunt Maria and uncle Bernard following the death of his mother. He was killed in the Ratra ambush 1 September 1920.
A patrol of 5 RIC heavily armed, on bicycles in extended fashion was on route from Ballaghaderreen to Frenchpark Petty Sessions Court. They were fired on tem by a group of at least 25 Volunteers and a shoot out ensued. 2 RIC were shot, one died immediately and the second died the following day in Ballaghaderreen, Captain Thomas McDonagh died instantly. The ambush planned by Comdt Jim Hunt and Michael Marren was organised to seize many weapons.