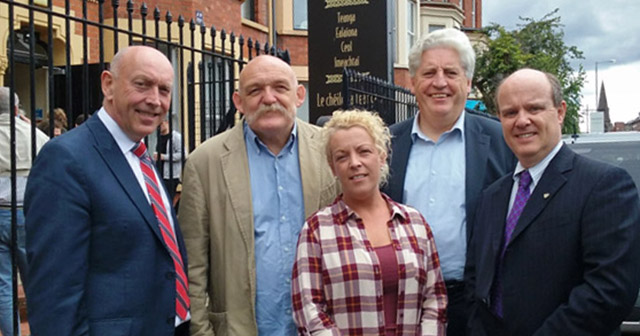 New York, NY September 8, 2016; The Aisling Irish Community Center of New York will honour former Boyle Co Roscommon native Hilary Beirne, as their Guest of Honour at their annual dinner dance to be held on September 30th in Eastchester New York.
Mr Beirne is being recognized for his years of devoted service to the New York City Saint Patrick’s Day Parade, his leadership as Chairman of the NYC St Patrick’s Day Foundation, his contributions to the “Fighting 69th Regiment of NY”, his contributions to Irish America, as well as his contributions to Ireland.
The Aisling Center dinner dance is held annually and this year will mark the 20th anniversary since the establishment of the center. The center was established in 1996 to help Irish emigrants arriving in New York City. It has had a remarkable track record of helping members of the Irish American community who are in need. Over the years, the center has helped people to get jobs and accommodations; their volunteers visit the elderly Irish in their homes; they organize classes at the center to educate people in technology, Irish dancing and Irish language. The center has a weekly night run where volunteers feed the homeless on the streets of New York, a truly remarkable community based organization.
“I am so humbled to have been asked by this wonderful and hard working community based organization to be a “Guest of Honour” this year, especially given that it is their 20th anniversary, I am so deeply honoured. I ask everyone in Ireland and the United States to support the wonderful work this center does, in any way they can” Beirne said.
The event will be held at the Lake Isle Country Club in Eastchester NY on Friday September 30, 2016.