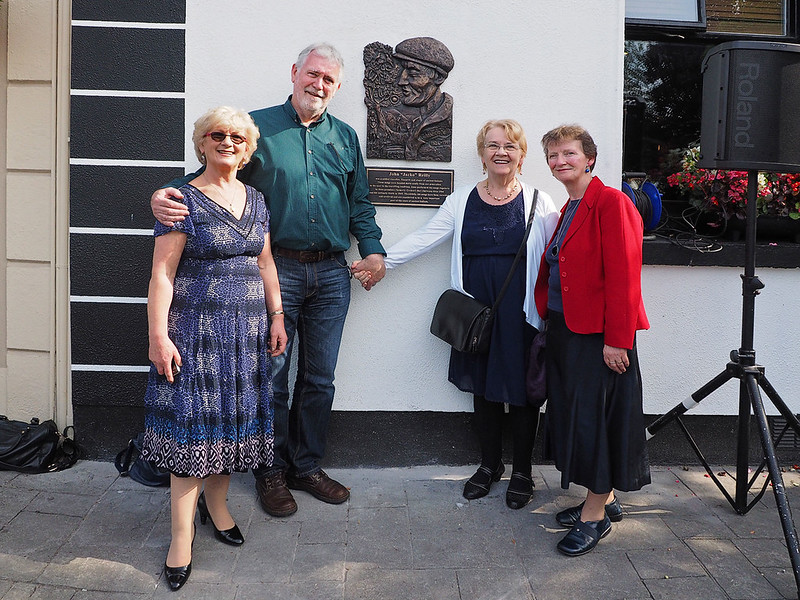 The Grehan Sisters Francie, Marie and Helen with Charlie McGettigan at the unveiling of the John Reilly plaque on the Crescent, Boyle, September 2014

JOHN REILLY TRAD SINGER, BOYLE CO. ROSCOMMON.
The Rolling Wave RTÉ – Radio One 9pm – Sunday 8th October 2017
This Sunday’s Rolling Wave programme on RTÉ Radio One remembers singer John Reilly of Boyle who was a traveller with a large selection of valuable songs and ballads.
The song and folklore collector Tom Munnelly was a friend of John’s and made recordings of his songs on visits to Boyle preserving his repertoire and bringing it to a wide audience. Christy Moore also knew John and was very taken by his singing. He includes a number of John’s songs in his performances since first singing The Well Below the Valley on the Planxty album of the same name in 1973.
John Reilly passed away in 1969 at the age of only 44 and in 1977 radio producer Tony Mac Mahon asked Tom Munnelly to write a script telling John Reilly’s story for the RTÉ Radio folk music programme The Long Note.
This Sunday’s Rolling Wave presented by Peter Browne gives us a chance, 40 years later, to hear that script once again and Christy Moore’s memories of John Reilly.
There’ll also be an archive interview with Tom Munnelly and a selection of John Reilly’s songs sung by himself and Christy Moore. It’s a fascinating story and it shines a light on a humble man who lived a materially poor life and seemed not to be fully aware himself of the immense value of his store of songs.
The Rolling Wave is at 9 o’clock this Sunday night on RTÉ Radio One and is broadcast to mark the 10th anniversary of the death of Tom Munnelly.
A celebration of Tom’s life and work “Come All Ye Loyal Heroes” is being held in Dublin on the 14th/15th October.
This looks like being an amazing programme!