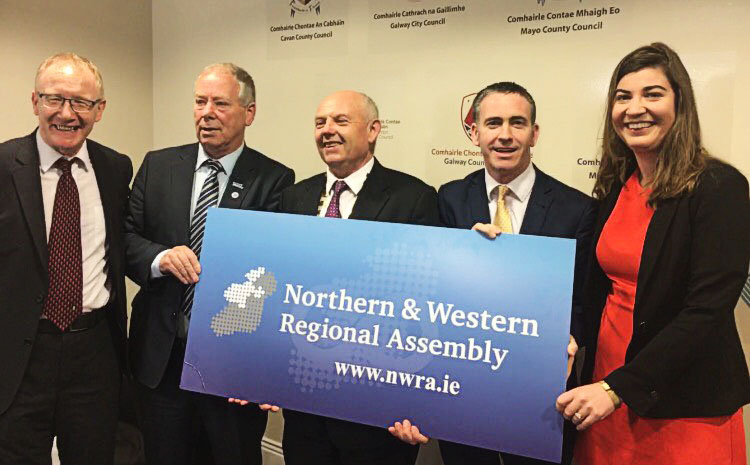 Minister of State at the Department of Housing, Planning and Local Government, Damien English TD was in Ballaghaderreen Friday (October 27th) to address the Northern and Western Regional Assembly and to engage with elected representatives on the Ireland 2040 Plan.

Minister English stated, “planning for the future of rural areas is a central element of the strategy for the National Planning Framework.  Where some Irish towns have witnessed depopulation, increased dereliction and vacancy, their regeneration and revival is targeted in the draft National Planning Framework will play a key role in influencing that revival at a regional level.”

Commenting on the Ireland 2040 Plan, Senator Hopkins stated, “really, the foundation for maintaining rural communities is access to employment. I strongly believe that if we are serious about employment in rural areas, we must provide incentives that encourage businesses to choose Rural Ireland in preference to more urban centres.  We also need to see more support for initiatives like the newly established Food Hub ‘An Chistin’ in Castlerea.”

“It is absolutely critical that we have capital investment in the N5 road between Scramogue and Ballaghaderreen.  This road is a really important piece of badly needed infrastructure to help create employment opportunities in this region.  It would give easier, safer access to labour and markets and reduce costs. Similarly, businesses need reliable high speed broadband in order to trade online, access consumers, market services and products.  For businesses in our region, this is even important, as it is necessary to reach out to wider markets in locations further away.”

Senator Hopkins continued, “the major hubs identified in this plan are Dublin, Galway, Waterford, Limerick and Cork.  This is very disappointing and unacceptable that there is no hub for the North West Region.  The Western Development Commission recommended that Sligo be developed as a hub for the North West.  I strongly support this view as it would offer better balanced regional development and offset some of the pressures being placed on Galway”.

“The plan sets out very detailed and specific actions in relation to the development of the five cities. For example, delivery of the Ring Road for Galway City has been listed for delivery.  However, we have no specific detail in relation to any of the major towns. Given the challenges in many of our large rural towns; specific, targeted actions are exactly what are needed. Many times throughout the report, there is a lot of jargon, reference being made to the reversal of rural decline but no actions as to how this can be practically achieved.”

Senator Hopkins concluded, “I have communicated all of these concerns to Minister English and have made a submission to the Draft Plan.”