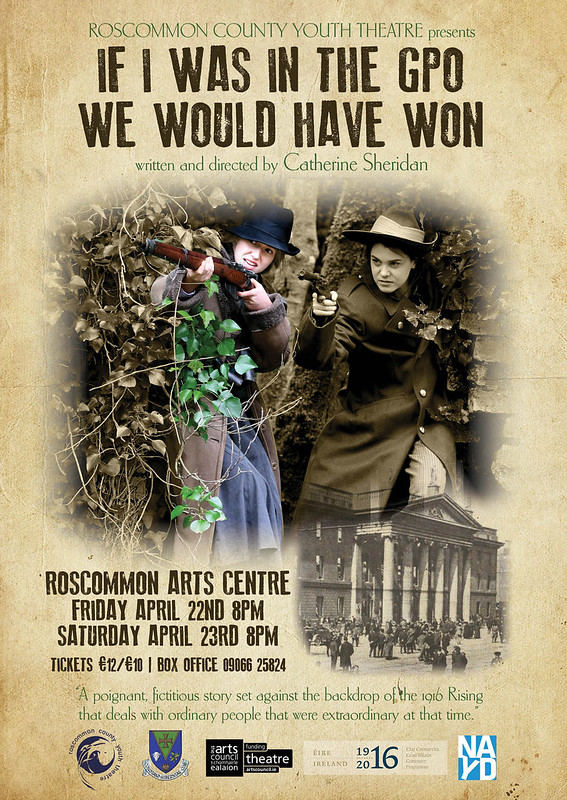 IF I WAS IN THE GPO WE WOULD HAVE WON
written & directed by Catherine Sheridan
“As nationalist fever swells to a bloody climax with the revolution of Easter 1916 in Dublin.
The conflict divides the city and her people, setting friends and family against each other.
Bridie Reardon is a young woman passionate for her country.
She, and a group of her ‘comrades’ want to fight for Ireland as much as any man, but down west they are told their place is at home. Bridie dreams of being in the middle of the hair raising experiences happening in Dublin. She could be a scout, a despatch rider, a sniper, a raider… She could fight side by side with the men.
As she struggles with conformity and the expectations of women in society at the time, will she comply or fight for what she believes in? If I was in the GPO, we would have Won, explores themes of courage, friendship, loyalty, responsibility, identity, integrity and femininity.
Prepare to be transported in time and brought on a journey confronting the divisions of the past and challenging our assumptions to re imagine our futures through the eyes of
meaningful characters.
If I was in the GPO, We would have Won is a poignant, fictitious story set against the backdrop of the 1916 Rising that deals with the ordinary people of that time.”
ROSCOMMON ARTS CENTRE
APRIL 22nd & 23rd 8PM

“If I was in the GPO we would have Won”