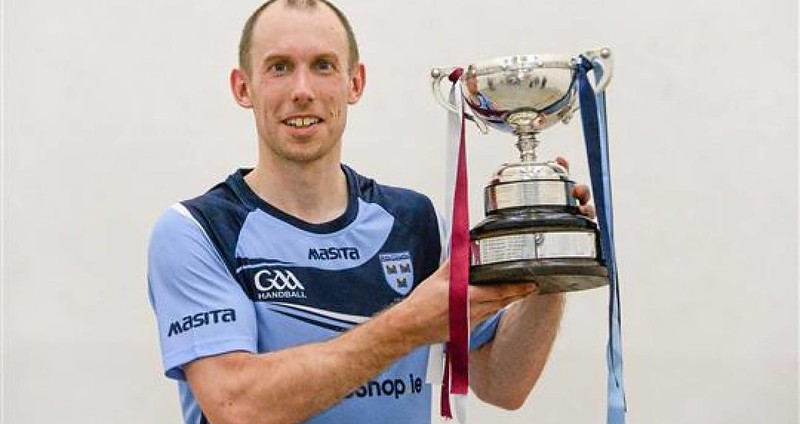 Tony Conboy wrote: Eoin won the All-Ireland 60x 30 handball final in the Croke Park Alley Saturday 7th September. In it he defeated seven time winner Robbie McCarthy of Mullingar who was going for his ‘5 in a row’. Eoin Kennedy is now a ten time winner with 6 in a row from 2004 to 2009 inclusive. Eoin then succeeded the all-time legend of handball Ducksy Walshe from Kilkenny who died suddenly three years ago aged just 51. The trophy which Eoin won is named after Ducksy Walshe. Eoin really wanted to win this one as it was the last such final that was to be played in this particular Croke Park handball alley complex as it is to be removed at the end of October and replaced by a modern all-embracing complex.

Eoin’s great mentor has been his dad Eugene who is himself a ‘Masters Champion’ and promoter of handball in their Dublin GAA Club St. Brigid’s.  Eoin’s grandfather Paddy Kennedy was an All-Ireland champion circa 1930 when Boyle was a mecca of great players such as the Gaughrans, Reids and Clarkes -including Pat in recent years- and the ‘Prince of Handball’ then Paddy Perry. It is such a pity that the great game that handball is did not continue to flourish and is now dormant in the town. Eoin’s uncles still living in Boyle, Joe and Pat, both played when young and are great followers of their nephew’s exploits.

So if the game is regrettably dormant in Boyle the tradition nurtured in Boyle and inherited by Eoin from his dad Eugene shines at the highest level in Dublin, nationally and in the annals of the game. So congratulations Eoin and Eugene  on your great sporting achievements.