Germany has recorded more than 50,000 deaths from the coronavirus since the start of the pandemic, the Robert Koch Institute disease control centre has said.

It said 859 people died from the virus in the past 24 hours, bringing the total number of fatalities to 50,642.

Germany survived the first wave of the coronavirus pandemic relatively well, but a second wave has hit it hard.

The country this week extended its current lockdown until 14 February  and Chancellor Angela Merkel has not ruled out border checks to slow the spread of new, more contagious variants of the virus.

Europe’s top economy closed restaurants, leisure and sporting facilities in November, then expanded the shutdown in mid-December to include schools and most shops to halt runaway growth in new coronavirus infections.

The RKI figures are based on people who died directly as a result of the illness caused by the virus and those who contracted Covid-19 but whose exact cause of death could not be confirmed.

The institute said it had registered 17,862 new cases since the previous day, bringing the total number of infections to more than 2.1 million.

New infections have soared far above the 50 per 100,000 people threshold set by the government for any relaxation of the restrictions, and currently stand at 115.3 over the past seven days.

Less than a month after Christmas, staff in the intensive care unit at Barcelona’s Hospital del Mar are working non-stop.

“We knew this was going to happen after Christmas because the restrictions weren’t very tight. Right now we don’t know how bad it’s going to get and we’re just hoping the hospitals aren’t overwhelmed.”

“We started the day with two free beds but a patient came in and now we’re expecting a second. And once again that will mean the intensive care unit is totally full.”

As feared, the easing of travel restrictions over Christmas to allow families to get together caused a huge spike in infections, with Spain counting record numbers of new cases as the pandemic’s third wave has taken hold. 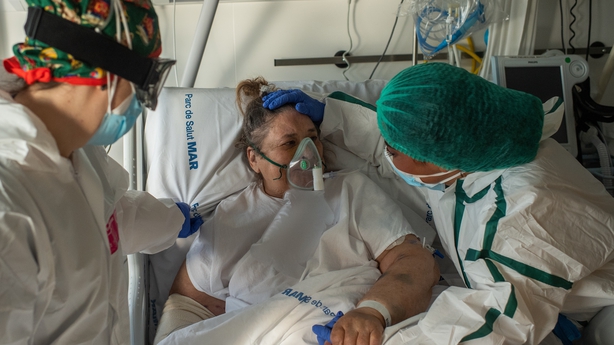 Over the past fortnight, the number of people going to hospital rose by 82% while intensive care admissions increased by 60%, prompting some regions, such as Valencia to set up field hospitals.

And the rising caseload has medics worried, with Spain registering record new infection levels since Christmas, pushing the number of cases over 2.4 million and deaths to more than 55,000.

“It’s not the tsunami we experienced in March or April but it’s worse than in the second wave” which in Spain began in July and continued until the late autumn, says Julio Pascual, the hospital’s medical director.

“In November, the intensive care unit wasn’t completely full of Covid patients but now it is. At the time, we had two floors devoted to Covid, while now we are filling a fourth,” he said.

According to a study of 10,000 Spanish medics carried out by Hospital del Mar researchers, 45% suffered mental health issues following the first wave of the pandemic. 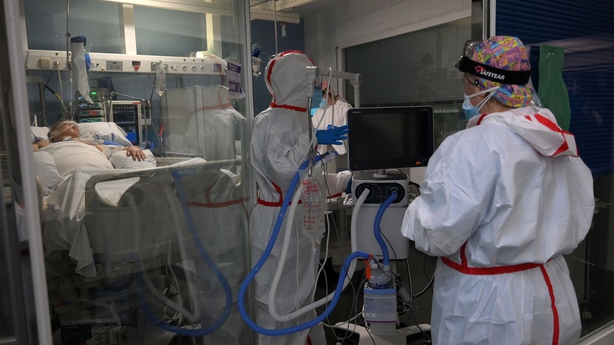 Around 28% presented signs of depression, a figure six times higher than in the general population, and 3.5 percent had considered suicide, the study showed.

“There’s still a long battle ahead of us.”

US president Joe Biden has signed new measures, including mask-wearing and quarantining requirements to  strengthen the US fight against Covid-19.

Under the new measures, travellers to the US, in addition to needing a negative Covid test result before flying, will now need to quarantine upon arrival, Mr Biden said.

His other orders included reenergising a so-far-stumbling vaccination programme and expanding requirements to wear masks on public transport.

The new president is seeking to vaccinate 100 million people in 100 days, increase the use of masks and testing, expand the public health workforce and offer more emergency relief to those struggling with the restrictions.