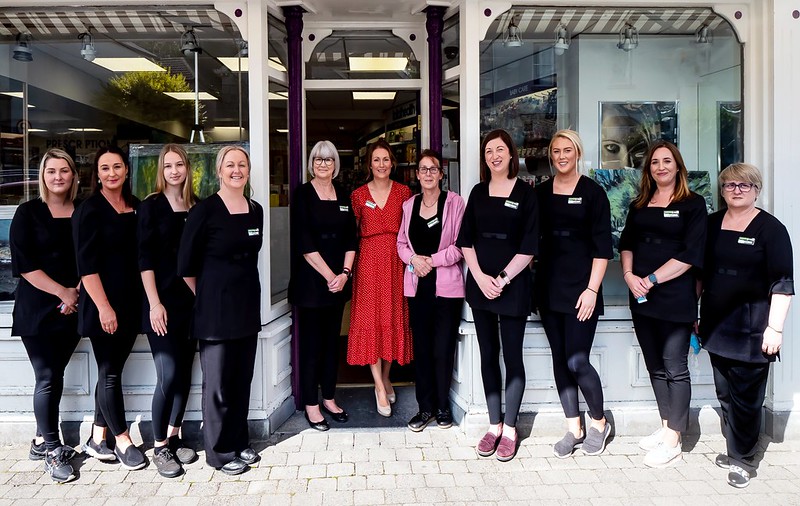 Brogan’s Pharmacy Boyle has joined forces with Irish owned Chemco Pharmacy Group to create new local outlet called ‘Brogan’s Chemco Pharmacy’
• Chemco Pharmacy Group, a 100% Irish-owned independent pharmacy chain, has acquired the long-established family-run Brogan’s Pharmacy in Boyle, Co. Roscommon. This will be the tenth Chemco branch in Ireland since the business began operating in Bunclody in Co. Wexford in 2008.
Chemco Pharmacy Group strives to bring its customers the best possible value while maintaining the familiarity of a local independent store. This makes the acquisition of Brogan’s a perfect fit, given the strong roots of the Brogan family in the area. Brogans was originally established by Frank Brogan in 1945 and his son Pat later took over the business. The outlet, located on Shop Street, will now be known as ‘Brogan’s Chemco Pharmacy’.
• Local pharmacist Declan Caulfield has joined the team as Supervising Pharmacist and he will work alongside existing Pharmacists Edwina Ledwith and Mary Early in the day-to-day running of the pharmacy. Pat Brogan is very much looking forward to working with the team in a reduced role. All 17 existing team members will remain with the business.
• James Cloney, Director of Chemco Pharmacy Group, said he is looking forward to Chemco becoming part of the local Boyle community:
“We’re absolutely delighted Pat Brogan has entrusted Chemco Pharmacy Group to care for his patients and customers going forward. Pat will continue to be an integral part of the newly re-named “Brogan’s Chemco Pharmacy” as our goal is to continue delivering the excellent service, dedication and commitment that Pat and his family have provided for the local community in Boyle for over seven decades.”
• Pat Brogan says he warmly welcomes Chemco Pharmacy Group to Boyle, particularly as the company has such strong local connections to the area:
“I’m delighted Chemco Pharmacy Group is coming on board, particularly because of the fact that one of the owners of the business – Pharmacist Chris O’Grady – is from Gurteen and I knew his late father Christy well. The Chemco team and myself hold a shared objective of operating at the heart of communities and catering for the needs of individuals and families, as well as patients in residential care.”
“I also want to sincerely thank all my customers for their support and custom over the years. It has been greatly appreciated by myself and my family. I now look forward to being in the pharmacy regularly alongside the same team that worked with me over the years and our customers can rest assured that Brogan’s Chemco Pharmacy will continue to provide the people of Boyle with the highest standards of care and attention possible for all of their needs.”
Chemco Pharmacy Group already has nine branches across Ireland – Bunclody, Carlow, Roscommon, Stradbally, Bandon, Celbridge, Portlaoise, Listowel, and most recently Graiguecullen. The head office in Kilkenny houses the Pharmaceutical Wholesale Department, allowing Chemco to pass on competitive prices to customers, thereby enhancing its ‘value for money’ ethos. All three directors of the business are MPSI registered Pharmacists and the company employs 140 team members across all branches.
For more details, check out www.chemcopharmacy.com or find Chemco Pharmacy on Facebook and Instagram
_____________________________________________
SHARE TWEET PIN SHARE