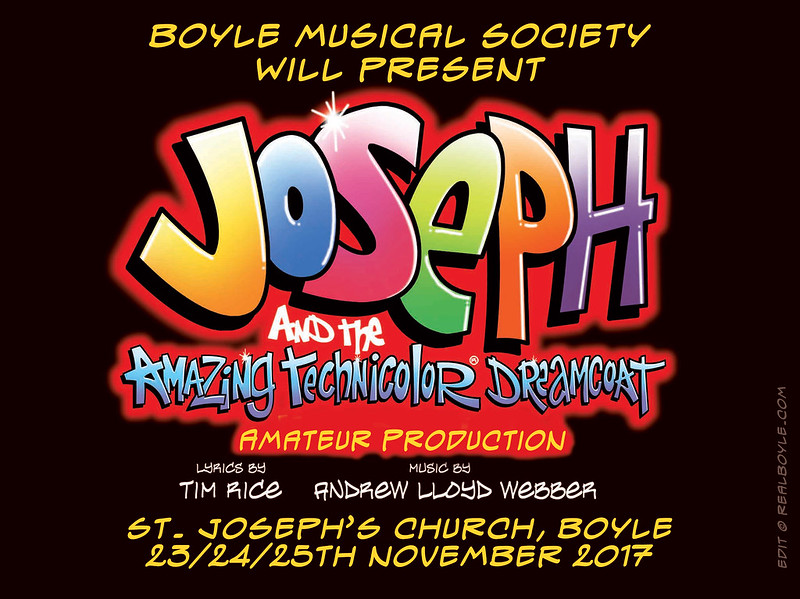 Well it looks like the evenings are drawing in around us, meaning it’s time to think about what to do for the autumn….. The best fun to be had however, will be taking part in Boyle Musical Society’s forthcoming production of ‘Joseph and the Amazing Technicolor Dreamcoat’ which will be staged from November 23rd to 25th in St. Joseph’s Church, Boyle.
Rehearsals will begin on Monday September 4th in St. Joseph’s Hall at 8pm and a warm welcome is extended to all new, former and existing members to join up for twelve unforgettable weeks of music, singing, drama, dancing, comedy and lots more….
Rehearsals will continue in the Hall on Monday and Thursday evenings. Our Musical Director Anne and Director/Choreographer, Vivienne will be on hand to outline the show to everybody, so come along and join the fun. It is hoped to have the principal parts in the show cast by late September, so we are really expecting a big turnout at the first rehearsal.
Moving the show to a different venue for this year, is a huge undertaking and challenge for BMS but we can assure both participants and audiences alike, that this will be a monumental production and a truly spectacular, unforgettable experience for all involved!
We will be looking for children from 5th and 6th class to take part in the show and we will hold a workshop specifically for them, at a later date. More details to follow.
Based on ‘The Coat of Many Colours’ from the book of Genesis, with music by Andrew Lloyd Webber and text by Tim Rice, ‘Joseph And The Amazing Technicolor Dreamcoat’ is a show for all the family. It features well known songs like ‘Close Every Door’ and ‘Any Dream Will Do’. Boyle Musical Society last staged ‘Joseph…’ back in 2001.
So, it’s all going to start in just two weeks time. Come along and join the fun on Monday, September 4th in St. Joseph’s Hall at 8pm.