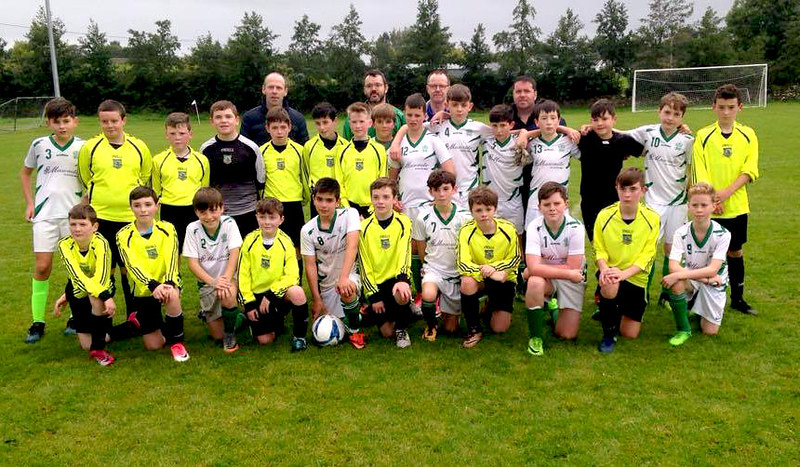 Yeats take the points with early goal…. By Ronan Flanagan
• Sligo Leitrim Boys U-13 Division 1 League
• Boyle Celtic 0 : Yeats United 1
• Yeats United’s early goal made the difference as they defeated Boyle Celtic in the second match of the Sligo Leitrim Boys U-13 Division 1 League.
While Boyle dominated throughout the sixty minutes they found it hard to find the net.
In the first half, after the concession of the early goal, Boyle piled on the pressure. Barry Cryan’s shot fired just over from distance and Andrew Mc Gee produced a strong effort only to find the hands of the Yeats Goalkeeper. From the resulting clearance from the ‘Keeper, the Yeats number nine fired wide from an acute angle. Half Time: Boyle Celtic 0-1 Yeats United.
‘Celtic started the second half strongly with Nicholas Callan shooting just off target and Barry Cryan hitting the crossbar. Yeats’ had few chances but Boyle’s goalkeeper, Oran Henry was hard to beat. On fifty- two minutes, Cryan’s inviting cross reached Mark Halligan who headed just wide.
Boyle had two chances to find an equaliser in the dying minutes. Firstly, centre back David Beirne had his shot saved. Seconds later, Boyle surely felt they had an equaliser. Conor Kelly and Gary Healy played a one two with Kelly finding Tommy Walsh who placed the ball in the back of the net only to be ruled offside. That was the final chance of the match and following the resulting free kick, the referee blew the full-time whistle.