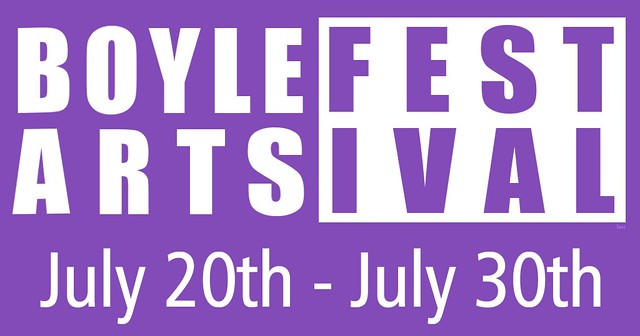 Once again, Boyle is the place to be this summer, with appearances by Anúna, Declan O’Rourke, Miriam O’Callaghan, Eddi Reader, Brian Kennedy, Rackhouse Pilfer, Regina Nathan, The Celtic Tenors, Michael McHale, The Inishowen Gospel Choir, Jon Kenny and Mary McEvoy all lined up for the 28th annual Boyle Arts Festival, which will take place from July 20th to 30th. More details of very exciting and diverse events will soon be announced when the official programme is launched, in June.

The Festival calendar is already bursting at the seams with almost fifty events, including an eclectic mix of visual arts, music, drama, film, comedy, workshops, storytelling, children’s events, poetry, readings and much more! If you are planning a visit to Boyle this summer, then make it late July, so you can enjoy as much of BAF 2017 as possible!

Tickets for a selection of events will soon be available to purchase on www.eventbrite.ie

Some of the names to watch out for include acclaimed singer songwriter Declan O’Rourke, who will kick off this year’s live gig programme with an intimate solo performance in King House on July 21st.
Brian Kennedy will make a long overdue return to the Boyle stage, when he plays a solo acoustic gig in the Church of Ireland on July 22nd.
Anúna, who need no introduction, will make a welcome return to Boyle for a very special 30th Anniversary performance in the Church of Ireland, on July 23rd and Rackhouse Pilfer will make their debut appearance in Boyle on the same evening, in Daly’s Storehouse.

The classical music programme includes performances by some of the finest contemporary artists in the country. Watch out soprano Regina Nathan on July 27th, pianist Michael McHale on July 25th, The Celtic Tenors on July 28th and delightful classical/rock/pop fusion with New Airs on July 22nd.

If you’re looking for traditional music, David Power and Martin Hayes will rip it up during a late night performance in King House on July 29th.

In the film genre, Peter Weir’s acclaimed atmospheric Australian masterpiece ‘Picnic At Hanging Rock’ will get its’ first showing in Boyle since 1977, while special extended versions of the local films ‘Boyle – Through The Magic Lantern’ and ‘Boyle – Above And Beyond’ will also be shown during the Festival. Children, watch out for showings of ‘The Jungle Book’.

Comedian Chris Kent will present a night of comedy in King House on July 27th. And look out for superb drama with Beezneez on July 26th and with Jon Kenny & Mary McEvoy, who will present ‘The Successful TD’ on July 29th.

We would like to thank Roscommon Co. Council for the use of the beautifully restored King House which as always, houses the centrepiece of Boyle Arts Festival – the main Visual Exhibition, once again curated by Paul McKenna. The theme this year is ‘Facing West’ and the exhibition features 95 of the very best artists from the West of Ireland. Several other exhibitions, including the highly acclaimed Local Artists exhibition, will take place during the Festival and details will be available in the programme.

For more information on Boyle Arts Festival 2017 please go to www.boylearts.com www.eventbrite.ie or email info@boylearts.com Telephone 0719663085. Follow us on Facebook.

Boyle Arts Festival is supported by The Arts Council