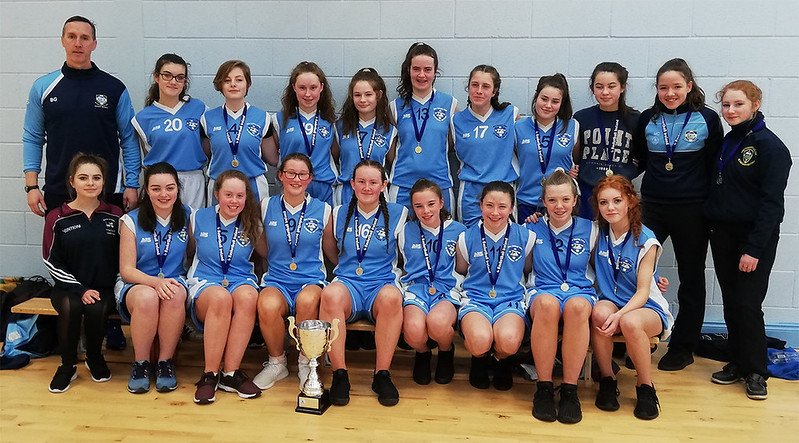 Abbey Community College 24 v Mercy College Sligo 20
It a tight and tense affair Abbey College girls skill, determination and will to win proved decisive as they were crowned North West Regional Junior Basketball Champions. This win was made all the more spectacular considering 5 of the normal 12 we either sick or injured. To make matters worse Caoimhe Cregg, who was having the game of her life, went off injured at the start of the third quarter. However massive credit must go to the girls who stepped up and showed the strength of this squad to help the team to victory.
Nerves were evident in the opening quarter with both sides making basic errors. Mercy went into a 4 – 0 lead and were playing the better basketball before the Boyle girls tightened up defensively and got into their grove. Isabelle King scored two beautiful baskets to close out the first quarter all even on 4 v 4.
The 2nd quarter was all about Caoimhe Cregg who was outstanding and really drove at the heart of the Mercy College defense where she either scored or was fouled and on her way to the basket. Her new free throw technique was paying dividends as she scored from three of her four attempts. Katelyn Roddy also brought her shooting arm with two lovely baskets from distance making it 14 v 9 at half time.
The start of the 3rd quarter proved disappointing for Cregg. While fighting hard for a ball on the ground she damaged her hip flexor and after treatment and a long delay she was carried from the court and out for the rest of the game. Other teams might have folded at this sight, but not these Abbey girls. They showed resilience, determination and an excellent work rate to end the quarter 22 v 16 ahead with six points from Feely and and a lovely basket from Grainne Rooney.
The 4th and final quarter proved to be an edge of your seat game where the Mercy College were not prepared to go down without a fight. They left it too late for the comeback however and an insurance basket from Feely late it the quarter helped stem the flow and left the final score Abbey College 24 v Mercy College 20.
Great scenes of celebration greeted the final whistle and Abbey College now go to Scoil Chonglais, Baltinglass, Co. Wicklow on April 1st where they will play St. Joseph’s, Charlestown, St Mary’s Dundalk and Baltinglass in the All Ireland playoffs.