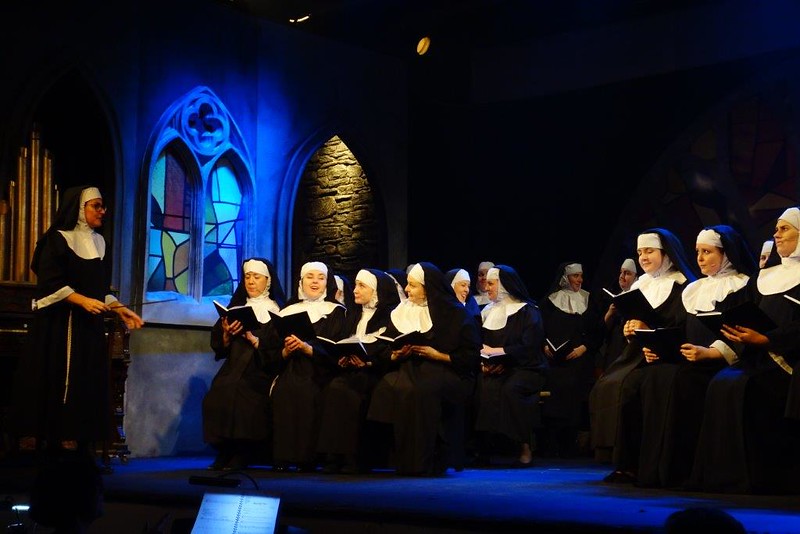 In the twelve weeks since rehearsals began, the cast, committee, crew and production team have spent every moment ensuring that this will be an outstanding show! So, with the lights set, the sound balanced and the orchestra tuned up, the cast are ready to unveil what promises to be another Boyle Musical Society spectacular!
Set in the late 1970s, singer Deloris Van Cartier (played by Janet Feeney) is performing to a few gangsters in an almost empty Philadelphia nightclub. Her dodgy boyfriend, Curtis Jackson (Darragh Beirne) owns the place and Deloris mistakenly believes he is going to let perform there regularly. Disappointed, she decides to break up with Jackson and leave Philadelphia but she witnesses him and his crew murder someone accused of “squealing” to the cops. Terrified, Deloris flees and Jackson orders his men to find her.
Deloris runs into a police station and tells the desk attendant Eddie Souther (Robert Reid), what has happened. Eddie recommends the witness protection programme and sends her to a Convent! When Deloris arrives, she learns from the Mother Superior (Catherine Bolger) that contact with the outside world is limited and that she cannot smoke, drink or wear any of her less-than-appropriate clothing.
Deloris becomes Sister Mary Clarence and discovers just how much is limited when she is a nun. Meanwhile, back in his nightclub, Jackson is frustrated that he cannot find Deloris and he tells Joey (Enda Regan), TJ (Diarmuid Beirne) and Pablo (Cathal Tivnan) how he will not stop until he finds and kills her.
Deloris sneaks out to a slinky bar, followed by Sister Mary Patrick (Karen Gordon) and Sister Mary Robert (Laura Kiely), who see how fun things can be outside of the convent. However, Deloris recognizes Joey and his gang. Suddenly a fight breaks out, giving Deloris and the Nuns a chance to escape. Eddie and Mother Superior meet them back at the convent. Mother Superior tells Deloris that she must conform to the Nun’s life to stay safe.
At the choir practice Deloris takes over from Sr. Mary Lazarus (Daniela Beadnall) and teaches the nuns how to sing in key and on time. That Sunday, the choir performs rousing, up-tempo hymns and although the church is struggling, the improved performance and new material bring an influx of donations and membership. Mother Superior however, is horrified at how the traditional choir she knew has changed.
Mother Superior wants to get rid of Deloris, but Monsignor O’Hara (Gerry Wade) reminds her that investors want buy the church and that they love the choir. The choir has become incredibly successful and the money from donations will cover the Church renovation.
The choir has even been asked to perform for the Pope (Daniel Dill). Meanwhile, Jackson and his goons have spotted Deloris accepting the invitation with the choir, on television. Jackson orders his henchmen to get into the convent and bring Deloris back.
The other nuns overhear Mother Superior and Deloris talking and she is forced to tell them the truth about who she really is and that she cannot perform with them. She runs from the convent and stays at Eddie’s house for the night. The following day, she is due to testify in court against Jackson and his boys and go back to pursuing the career she’s dreamed of. But she begins to reflect on her life, finally realizing that the choices she is making will leave her with nothing but fame and money. She decides to return to the convent and sing with her sisters! However, dressed as nuns, Jackson, Joey, TJ and Pablo sneak into the convent. Will they find Deloris? Will the Nuns protect her? Will Eddie come to her rescue?

The answers to these questions and many more will be revealed when ‘Sister Act’ hits the stage on Wednesday night!
A vibrant local cast of 42, including many familiar and new faces, have been working on this show since September. Other principal parts will be played by Ruth O’Dowd (Sr. Mary Martin), Majella Gaffney (Sr. Mary Theresa), Ceara Conlon (Michelle), Colette Noone (Tina), Michael Lohan (Ernie) and Conor White, (Drag Queen).
Joining the principal cast on stage are Laurina Brennan, John Reynolds, Stephanie Quinn, Kate Connolly, John-Paul Patton, Kerry Rawson, Emma Tiernan, Emma Flanagan, Emily McEvoy, Deborah Kehoe, Leanne Bruen, Fiona Kelly, Cathy Garavan, Ailbhe Conlon, Mardette Lynch, Áine Tivnan, Shelagh O’Connor, Fiona Keenan, Fiona Drury, Erica Ryan, Tracy Gunning, Jenny Wallace, Rhona McGrath, and Jennifer Murtagh
BMS is fortunate to have two very talented ladies making up the production team. Turning in her eighth year as Director is Vivienne Moran. Vivienne is continuously directing shows for variety groups and schools, running workshops and if all of that isn’t enough… she is also taking on her usual role as choreographer for Boyle Musical Society! Her warm personality, creative flair and mentoring strengths have allowed both cast and crew to flourish in their roles again this year.
We are always delighted to have Anne Kielty as our Musical Director. Anne has an abundance of experience in musical theatre and choral work and she brings her teaching experience and love of music to Boyle Musical Society, where she works tirelessly with soloists and the chorus to produce the best vocals and harmonies for the stage. Along with being the orchestra pianist, Anne is also rehearsal pianist and chorus mistress.
‘Sister Act’ is a show for all the family and it will open in St. Joseph’s Hall on this Wednesday Nov. 20th and continue until Saturday Nov. 23rd at 8pm nightly. Tickets are priced at €15 and €12 for Wednesday, €18 and €12 for Thursday night and €18 for Friday and Saturday. Seats can be booked and tickets are available from the Únabhán Craft Shop beside King House.
Tickets can also be booked by telephone on the BMS Ticketline, 071 9663033 during booking office hours only. Credit and debit cards accepted. Tickets will also be available at the venue, each night.
For further information please visit www.boylemusicalsociety.com or follow Boyle Musical Society on Facebook.