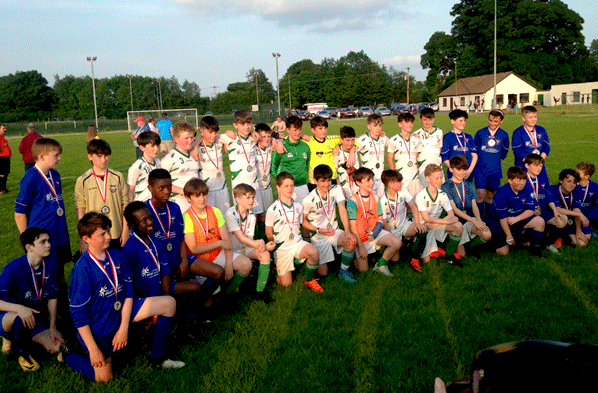 Boyle Celtic U-13’s captured the Sligo Leitrim Boys U-13 Division 1 League with a 2-1 victory over Merville United at a sun drenched Celtic Park on Tuesday evening.
The home side made the dream start, as two and a half minutes into the game, Nicholas Callan slipped the ball through Conor Kelly who finished to the back of the net. Boyle looked to take control of the game as Barry Cryan tried his luck from distance. Merville nearly had a goal of their own on twenty-one minutes as a deep free kick whipped into the box fired over crossbar. The away side equalised on the stroke of half time as a defence clearance arrived at the feet of number six whose shot found the back of the net.

The second half was as tight as the first as both sides pressed for a goal to go ahead.

Sure enough, it was Boyle who got it, as Kelly scored his second, curling his shot in from a difficult angle. Merville pressed for an equaliser, but the industrious Nicholas Callan and the defence behind him of Mark Halligan, David Butler, David Byrne and Mark Dwyer were alert to every danger. Livewire subs Seán Duffy and Daniel Carroll both added pace into the Boyle attack as the Merville defenders started to tire. Both nearly put the game beyond doubt. Carroll produced a rasping shot which rattled the crossbar, while Duffy’s header was saved by the goalkeeper from the rebound.

As the resulting corner was cleared, the referee blew the full time, sparking wild celebrations both on and off the pitch with the final score, Boyle Celtic 2, Merville United 1.