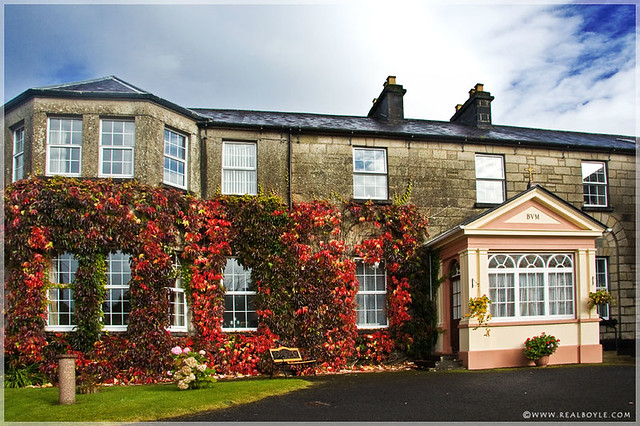 We have been informed that following its closure, 2 of the 4 nuns in residence are set to move to Sligo and the other 2 will transfer to Athlone.
• A beautiful setting was chosen for Boyle Convent in 1875, under the shadow of the 12th Century Cistercian Abbey and with the majestic Boyle River going through its grounds! The Convent of Mercy in Sligo town provided 4 sisters at the request of the Parish Priest -Fr. Mc Tucker. The Primary School began immediately with an enrolment of 200 pupils and in 1902 a new school was built. The Old School became a Knitting and Lace-Making School up to 1915.
• Meanwhile in 1908 the Sisters founded a Laundry which gave employment to over 30 men and women for 60 years.
• The Secondary Top in 1952 and Secondary School in 1969 continued the great tradition of education until the amalgamation of the schools in town in 2002. The Convent has a beautiful Chapel built in 1929 which is now frequented by the laity for 24 hour Adoration of the Blessed Sacrament.
• Due to their work with the poor from the time of the Boyle Workhouse the Sisters have always had a great rapport with the people of the town.
“Our house is open and hospitable to all and is one of the few which continues to have poor people call for meals.”